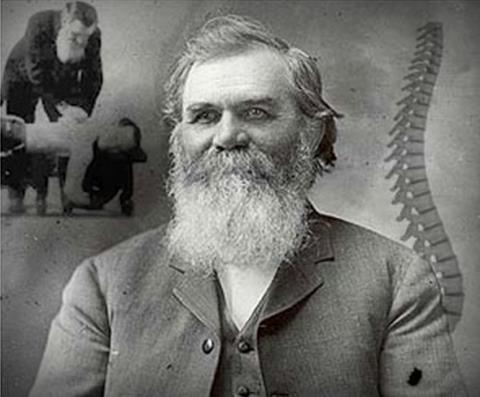 Daniel David Palmer, creator of the nebulous subluxation and father of chiropractic.

From time to time we respond directly to reader comments or e-mails in an article, when it seems that doing so would be a useful teachable moment. One of the strengths of social media is that it is interactive, which can be didactic.

I feel it is very important to respond to what people actual believe and say, because otherwise we may tend to get lost in our own narrative, as legitimate as it might be. That is the essence of ivory tower syndrome, academics talking to themselves without a reasonable sense of what is happening in society. Part of our mission is to interact with society, not just our colleagues, and to engage in a serious conversation about the nature of science and medicine.

To that end, I recently received an e-mail responding to an interview I had done previously about chiropractic. The e-mail is full of pro-chiropractic propaganda and misconceptions, and so it provides an opportunity to address some of these claims.

An appeal to an antiquity that never was

Your piece/video that was aired on MSN on Chiropractic / Chiropractors is a disappointment due to your lack of professionalism. I think the offensive parts are your deliberation on where Chiropractic stemmed from, of which you are incorrect on the origin or how it works and the level of skill it takes to be a Dr. of Chiropractic.

The charge of lack of professionalism or something similar is very common for the regular contributors to SBM. Sometimes the ad hominem approach rises to absurd levels (as David Gorski is unfortunately now experiencing), but often those who disagree with our position or feel threatened by it react personally.

There is often the implicit or explicit premise that being critical at all is unprofessional, or that everyone who considers themselves to be a health care professional deserves equal respect and should be treated as a colleague. However, we feel it is necessary to challenge the very legitimacy of certain professions, and to criticize them for not having a science-based standard of care, chiropractic included. If you disagree with our position, then address the facts and logic, crying “unprofessionalism” is just petulant.

It was not some divine intervention or hocus pocus, DD Palmer learned of the art of manipulation and it’s benefits from a form of Chinese medicine with ties to acupuncture that was practiced for centuries in Asia which also has ties to your profession – he was although the first to market it and its benefits in the USA, of which is practiced all over the world today helping people out of pain and in many cases back to not good but great health.

Here comes the standard chiropractic narrative. It is interesting how such narratives, like a religion, can evolve over time, and new generations come to believe the blatant historical revisionism as if it is fact.

In this case, however, we have DD Palmer’s own words to enlighten us – published in his 1910 book (errors in original):

Harvey Lillard, a janitor, in the Ryan Block, where I had my office, had been so deaf for 17 years that he could not hear the racket of a wagon on the street or the ticking of a watch. I made inquiry as to the cause of his deafness and was informed that when he was exerting himself in a cramped, stooping position, he felt something give way in his back and immediately became deaf. An examination showed a vertebra racked from its normal position. I reasoned that if that vertebra was replaced. the man’s hearing should be restored. With this object in view, a half-hour’s talk persuaded Mr. Lillard to allow me to replace it. I racked it into position by using the spinous process as a lever and soon the man could hear as before. There was nothing “accidental” about this, as it was accomplished with an object in view, and the result expected was obtained. There was nothing “crude” about this adjustment; it was specific, so much so that no Chiropractor has equaled it.

I founded Chiropractic on Osteology, Neurology and FunctionsÑbones, nerves and the manifestations of impulses. I originated the art of adjusting vertebrae and the knowledge of every principle which is included in the construction of the science of Chiropractic.

There is no mention of acupuncture, although the subluxation theory of chiropractic is a vitalistic belief, as is the modern formulation of acupuncture. Palmer’s story of fixing the deaf janitor is almost certainly nonsense. If it were accidental, Palmer changed the story over time to fit the narrative he needed as an origin of the pseudoscience he apparently invented.

To say that subluxation theory is based on neurology, however, is like saying that astrology is based in astronomy, only in the most superficial sense, and without any of the actual science.

In fact the science of neurology contradicts all the major premises of subluxation theory. Compression of spinal nerves generally causes pain, numbness, and weakness in some combination. Subluxation theory claims that spinal nerve compression can exist without these symptoms, but block only the mystical life energy whose alleged existence has eluded science to this day.

The history is quite clear. Palmer, by his own account, started out as a “magnetic healer” (in other words, a quack) and then discovered and developed chiropractic almost out of whole cloth, with some inspiration from vitalism and osteopathy. Chiropractic is not based on an ancient Chinese secret, but that is a clear attempt to make an argument from antiquity (a common fallacy used to support dubious treatments).

The modern chiropractic narrative relayed by the e-mailer is nothing but retconning – retroactively fitting the history of chiropractic to the current marketing narrative. “We’ve always been at war with Eastasia“.

An appeal to irrelevance

Leander Eckhart scientifically proved the value of manipulation with passive motion controlled traction using video fluoroscopy at the U of W as to correcting spinal fixations, along with his research and work correcting Scoliosis, documenting physiological changes, so you are incorrect there too.

This is a common tactic of pseudoscience also – citing research which does not establish the basic principles of the claim as if it does. Chiropractors, even though they have had over a century to do so, have not demonstrated scientifically that chiropractic subluxations exist, that manipulation can “correct” alleged subluxations, that such subluxations are associated with any specific disease or that “innate intelligence” (their word for the vitalistic life energy) exists, or that chiropractic manipulation improves any disease.

None of their basic premises have been demonstrated scientifically, and in fact their claims are incompatible with modern medical science.

Keep in mind, I am referring here to subluxation theory specifically. Contemporary chiropractors have a broad range of practice, and some practice something closer to physical therapy or sports medicine, without treating disease through subluxation theory.

A little bit of historical denial, and some tu quoque

Being a professional using modern (scientific?) arguments against century old beliefs is a fail on so many levels not to mention a cheap shot with no scientific support or merit. Turnabout would be fair play if one was to look at your profession and there are many skeletons in that closet.

This is a very odd claim. I think the unstated premise here is that chiropractors no longer practice the century-old beliefs of their profession. If this were true, then he might have a point, but it is clearly not true.

To give an analogy, I have written about phrenology, the practice of determining personality through reading the bumps on the outside of the skull. This was practiced by neurologists two centuries ago. There is a tiny fringe that still practice phrenology, but not within the medical or neurological professions. I wrote about it for historical interest only, not as a criticism of modern neurologists.

If subluxation theory had been abandoned entirely by the chiropractic profession the situation would be the same. In fact, I don’t spend time criticizing modern osteopaths for their outdated beliefs (although there appears to still be a fringe who cling to them). Largely osteopaths have rejected the pseudoscience of their past and embraced science-based standards.

As a profession chiropractors have not rejected the pseudoscience of their origin. By some estimates about 30% of chiropractors still practice according to subluxation theory. They are pseudoscientists. And this is not some fringe. The British Chiropractic Association famously fought with Simon Singh over their support of blatantly pseudoscientific current chiropractic practices, and lost spectacularly. They defended manipulation for the treatment of a long list of childhood diseases and disorders, based upon terrible science, which I dutifully deconstructed on SBM.

Subluxation theory is not a skeleton in the closet. It is a living breathing part of modern chiropractic.

And finally, some flat-out propaganda

Would it be too much to ask for you to be professional, most Chiropractors are, they have much more education that most MD’s and Specialists, with a minimum of 2 years pre-med before they can enter into the 4 year program to become a Dr. of Chiropractic and compulsory ongoing annual continuing education to keep their license.

Yes, it is too much. The chiropractic profession, in my opinion, does not deserve professional respect. They tolerate pseudoscience in their ranks, and do not have a reasonable standard of care. They are not science-based as a profession.

The claim that chiropractors have more education than most MD’s is pure propaganda, and is very telling. We have covered the issue of chiropractic education before, so I won’t go into it again in detail. Suffice it to say chiropractic basic science and clinical education is not even close to what MDs receive.

Conclusion: The usual tropes that miss the point

The e-mailer ends with the usual tu quoque logical fallacy – more MDs have killed patients than chiropractors. This misses the risk vs benefit context, and also is not a meaningful comparison because of the relative size of the professions. The claim is just more misleading propaganda.

If chiropractors wish to defend themselves from science-based criticism, they should do proper research and then adjust their practice based upon the results of that research. They should align their profession with modern science.

Instead, they generally attack the messenger, attack the medical profession, demand respect they have not earned, and revise history to suit their marketing needs.

One third of eating disorder sufferers face discrimination at work