Parabiosis – The Next Snakeoil 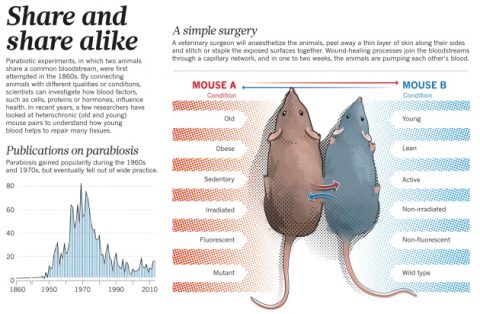 The pattern has repeated so many times that it is truly predictable. Scientists turn their eyes to one type of treatment that has theoretical potential. However, proper research from theory to proven treatment can take 10-20 years, if all goes well. Most such treatments will not work out – they will fail somewhere along the way from the petri dish to the clinic.

However, the media likes a good story, and one of their favorite narratives is the “new miracle cure.” The will often take preliminary basic science research and present it with headlines promising a cure for some horrible disease (sometimes they will add a question mark).

When we see these headlines, we know what will happen next – hucksters will ride the hype with a wave of snake oil products promising the same cure, and claiming to be based in science. Dr. Oz will probably promote it on his show, and Mike Adams will rant about the government conspiracy to keep this cure from the public (but he will sell it to you).

We have seen this pattern with antioxidants, stem cells, resveratrol, and countless others. Sometimes the hucksters manufacture their own hype, as with green coffee beans. They don’t wait for actual scientists, they corner the market on some worthless bean or berry, then invent health claims for it and try to hype demand through the usual channels. This sadly works.

The huckster cycle is beginning again with a treatment called parabiosis. Actually, it is a treatment based on parabiosis, but is not parabiosis itself. The term refers to experiments that were first conducted in 1864 by Physiologist Paul Bert. He cut the skin of two mice, then sewed them together. When they healed together their blood vessels combined, enough so that they essentially shared their circulatory systems.

This technique became popular for studying physiology. Researchers could discover if blood factors affected some physiological property. The technique could be used to study the effects of hormones, for example.

In the 1950s researchers connected old mice to young mice to determine its effects. They found that the old mice experienced numerous rejuvenating effects. May biomarkers of youth returned, and the mice lived longer. The younger mice connected to older mice also has shorter lifespans.

Parabiosis experiments died out in the 1970s, partly because researchers had learned what they could from the technique, and regulations of animal research made it more challenging to conduct the experiments.

Interest in parabiosis, however, is now coming back. A recent article on Inc.com is sure to spawn interest and another cycle of snake oil promises. The article focuses on how billionaire Peter Thiel is interested in plasma transfusions from young donors as a life extension and rejuvenation treatment, based on the science of parabiosis.

I can’t help but also see the supervillain angle to this story – an aging billionaire, desperate to live forever, is feeding off the blood of young healthy victims. Of course, to get the full effect, a simple transfusion will not do. He will have to connect their circulatory system to his own.

What is the current state of the science in terms of parabiosis and anti-aging effects? Any specific health claims for humans is definitely unproven at this time, but the research is intriguing (i.e., perfect for snake oil). The mouse experiments convincingly show a benefit from parabiosis for older mice. One question is, does this benefit come from specific factors in the blood or from the fact that they are sharing their entire circulatory system?

In other words, are the younger mouse’s kidneys, livers, and lungs just supporting the older mouse’s organs by doing the heavy lifting of cleaning and oxygenating the blood? This is probably a factor, but the other option is that there are proteins in the young mouse blood that exist in smaller amounts in the older blood.

The latter seems to be true also. Researchers have found that higher levels of oxytocin in young blood, for example, stimulate muscle growth. Factors in the blood also seem to stimulate stem cells in many organs to start dividing again. This may be the main rejuvenating effect, bringing stem cells throughout the body back to life, helping to heal damage, replace cells, and increase organ function.

We are in the preliminary research stage. In order to truly answer these questions we need to do carefully-controlled clinical research in humans. Open questions include whether one time transfusions of plasma from young donors (<30) will have any enduring benefit on older recipients. It seems from mouse studies that blood cells are not necessary, just the plasma, which contains all the proteins and hormones that are likely having any effect.

If plasma is enough, then what effect does it have? Can it treat diseases like Alzheimer’s? Can it increase lifespan? How long do the effects last?

Critically – are there any risks or side effects? The mouse research revealed what was called parabiosis disease. In an experiment with 69 mouse pairs, 11 of them died quickly. It is believed this was from some incompatibility, a form of rejection. This has been reduced in later experiments by using genetically matched inbred mouse strains. So – how carefully matched do the plasma donors have to be to the recipients?

My suspicion is that chronic treatments with anything — plasma, drugs — that rejuvenate cells in old animals is going to lead to an increase in cancer. Even if we learn how to make cells young, it’s something we’ll want to do judiciously.

Some researchers object to the notion that young plasma transfusions should be considered “rejuvenation.” No cells are being rejuvenated, they are just being stimulated into working harder. This may provide a temporary benefit, but is unlikely to significant affect aging.

There may be a real benefit in specific disease states that are missing some critical protein in the plasma. Again – this will take years of research to sort out.

Other researchers feel we should identify the specific factors in the plasma that are having specific physiological effects and then give them in purified and specified amounts for specific conditions. This, of course, would be ideal, but the more clumsy method of just giving plasma may have to do until we identify those specific factors.

Where do things stand?

As of right now, young blood transfusions as the next elixir of youth is enjoying its 15 minutes of fame. The science is genuinely interesting, and seems deserving of further research. What is clearly needed is high quality clinical research, before any clinical claims are made.

Given history, however, it is likely that young transfusions, or even some form of parabiosis, will now also take on a life of its own as the latest snake oil product. Already there is a company called Ambrosia who is running a “study,” and as Inc.com reports:

The study is patient-funded; participants, who range in age from late 30s through 80s, must pay $8,000 to take part, and live in or travel to Monterey for treatments and follow-up assessments.

This is ethically dubious, in my opinion. Subjects should not have to pay for a treatment that is part of research. This opens the door to selling unproven treatments under the guise of doing a study (which we have seen Burzynski do for years).

Hopefully I will be able to tell you in 10-20 years if transfusions of plasma from young donors is of any clinical benefit. Until then the treatment will likely have a second life on the fringe as snake oil. Given that this is likely to be a very expensive treatment, it will probably be elite snake oil for the wealthy.

It will probably not be limited to the wealthy, however. Hucksters prey not only on the rich, but the desperate. Poor individuals with Alzheimer or other serious diseases will mortgage their house, or raise funds from friends and family, to pay for very expensive yet dubious treatments, even those costing hundreds of thousands of dollars. The international stem cell clinic fraud is one example of this.

The only thing that will end this cycle of exploitation and pseudoscience is for the scientific and academic communities to take proper interest and speak out, and for government regulators to do their job to protect the public from health fraud. Sadly, this is unlikely to happen. That is part of the repeating pattern also.