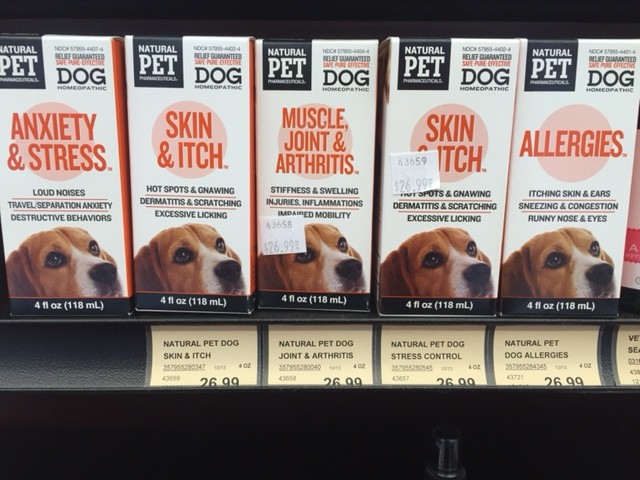 Nothing says opportunistic like selling water for pain control.

The first principle is that you must not fool yourself — and you are the easiest person to fool.

I like to think of myself as a rational person, but I’ve been fooled by my own experience again and again. I’ve made bad decisions and wasted time and money believing what I was seeing, instead of being objective and looking at the evidence. One of my most memorable lessons has come over the past 14 years with my Labrador Retriever, Casey.

We acquired Casey as a puppy, and she was less than a year old when she started limping. Investigations confirmed dysplasia, a genetic condition that leads to degenerative joints, arthritis, and pain. We were devastated. After considering the few treatment options that existed, we decided to skip surgery and treat it conservatively. I had no desire to start her on a lifetime of anti-inflammatory drugs, being very familiar with their side effect profile. I was familiar with a supplement used widely in humans that had some weak but somewhat promising evidence: We started giving her glucosamine and chondroitin supplements regularly. And we watched and waited.

It took some time, but Casey did appear to improve. We were thrilled. Life went on, and other than the occasional rough play session, Casey’s limping was mild, and she thrived. We continued the supplements, confident that we were doing good. But eventually I started paying attention to the emerging evidence on glucosamine and chondroitin. Once touted as a panacea for arthritis and joint pain, there had finally been some high-quality trials conducted – and the results were disappointing. Even this blog covered the issue, and contributors like Harriet were skeptical of glucosamine. Its supposed mechanism of action really wasn’t even that plausible. I started to wonder if the supplements were really doing anything for my dog’s pain. Eventually I decided on a trial – so I stopped the supplements about seven years after I started them. Neither my wife nor I could notice any difference at all in her mobility. Nor did the veterinarian. We’d been fooling ourselves, spending hundreds of dollars in the process.

Now I’m back in a situation with Casey where I’m making treatment decisions based on wishes and expectations, and not fact. The limping seemed to be managed with regular walks, and keeping her weight under control (some medication for a thyroid condition helped). But in the past few years, there have been changes. The rare use of meloxicam (an anti-inflammatory) gradually became a regular daily dose. The tail kept wagging, and we still had our long walks, but the energy started to decline. A trip to the veterinary emergency room a year ago led to a prescription for gabapentin (a drug typically used for neuropathic pain) which I’ve been reluctant to discontinue, despite the lack of good evidence it works, and even as her mobility has continued to deteriorate. Now she’s closing in on 15 years old. Casey’s legs are giving out on her, and she’s falling more and more. Just this week, she’s decided she doesn’t want to go for walks anymore, and she’s not finishing her meals – which never, ever occurs with Labradors unless something is seriously wrong. She’s becoming a shadow of the dog we’ve known. I think we’ve nearing a decision point – we’re about at the limits of what a dog’s body can do, and what veterinary medicine can offer. And while I know that all of this is to be expected in a Labrador Retriever who is 14 years old, I still want something, anything, that will give us more time.

And now the the professional

“The three most dangerous words in medicine: in my experience.”

It’s exceptionally difficult to accept that you’re fooling yourself. As a pharmacist, I have spent a large part of my career speaking with people about health, illness, and self-care decisions. Some of most interesting discussions have been about homeopathy, because I know that any effects that patients may report are unrelated to the product itself – because homeopathy is effectively the same as doing nothing. Homeopathy is the air guitar of medicine – it’s packaged like a drug, and sold in pharmacies alongside actual medications, but the product are indistinguishable sugar pills, with no medicine in them at all. Rigorous trials demonstrate what common sense would suggest: Homeopathy is no more effective than an equivalent placebo. It’s not difficult to imagine the potential harm from someone using a product like a homeopathic spray for asthma. But beyond the avoidance of life-saving treatments, there’s the wasted resources and the overall illusion that fake medicine, like homeopathy, can create. A pharmacy I once worked in on a part-time basis had a sizeable homeopathy business back when homeopathy was more of a fringe product. I would never recommend the remedies, but was regularly asked for them. And I learned pretty quickly that it was difficult to convince regular users that they the beneficial effects they reported weren’t due to the remedies. Many were fiercely loyal to their particular product, for their particular ailment. They trusted their alternative medicine provider, usually a naturopath or homeopath. Suggestions that they might try reassessing them were rejected and sometimes even taken as insulting – after all, who was I to tell them (even gently) that the product had no medicine in it at all? From what they could see, homeopathy working for them, and that was all the evidence they needed.

As l started reading the Science-Based Medicine blog and began looking more critically at the evidence base, I changed my advice. With patients seeking arthritis and pain relief, I stopped sharing anecdotal evidence (“I give it to my dog!”) and focused on what the evidence was saying. I wasn’t all that successful in my dialogue with patients – or health professionals for that matter, who sometimes seem so reluctant to let go of what they already know to be true. If it’s not the belief that “the patient knows best”, it’s the accumulation of positive anecdotes that can turn health professionals into believers, even when the evidence says otherwise. I’ve spoken with pharmacists who see no contradiction discussing the molecular basis of drug interactions while simultaneously believe that water has some sort of magical memory. “I’ve seen it work” they shrug, “science doesn’t know everything.”

The reasons why we believe these anecdotes, despite the science, have been detailed at length in other posts. Add in the conflict of interest that that comes from making a profit, and it’s perhaps not surprising that many pharmacies sell products that lack good evidence of efficacy. And this is where I take issue with many of my peers who work in community (retail) pharmacy settings – I argue that selling implausible and ineffective treatments to consumers, given a pharmacist’s professional responsibility, is unethical. I object to the sale of dubious products in pharmacies because I believe that pharmacies are places of health care delivery, with a responsibility to the public that goes beyond basic commercial business ethics. (And as I’ve pointed out, pseudoscience fails that bar, too.) In an environment like a pharmacy, consumers may be more accepting. They may be in a vulnerable state. And once that belief in in place, it may be hard to shake it. Confirmation bias can be powerful, and it can lead health professionals and consumers alike into beliefs about health that are not substantiated when you take an objective look at all the data.

Who better to exploit the public’s trust in pharmacists than perhaps the pharmacy profession itself? In Australia, there’s a new trend to employ naturopaths in pharmacies to promote guide the selection of supplements and alternative medicine. With pharmacies held in high regard by the public, this move is expected to give more legitimacy to the alternative medicine system of naturopathy. And while naturopaths themselves may be well meaning, it’s been pointed out repeatedly at this blog that naturopaths take an extreme and very selective view of the scientific evidence. Naturopaths can give good advice, but this is when that advice happens to be congruent with the naturopathic philosophy. But naturopaths will routinely reject scientific evidence that doesn’t conform to their beliefs about medicine. If you ignore the non-confirmatory evidence about supplements and pick and choose what you want to accept as fact, then you’ll be more likely to believe that supplements offer good health benefits. Few do. This move has brought criticism from within and outside the pharmacy profession as a thinly-veiled attempt to boost sales:

The president of the Australian Medical Association Dr Brian Owler said pharmacists needed to re-evaluate their professional roles. “These things run the risk of diminishing the professional reputation of pharmacists and suggests they are more of a shop rather than a place to seek advice about medications,” he said.

Greg Turnbull, spokesman for the Pharmacy Guild of Australia, said if members employed complementary therapists, they should “be mindful of their duty of care and responsibility for any advice or service provided within their pharmacy”

“The problem is pharmacists need complete oversight of what goes on in the pharmacy,” he said. “You are in charge of training your staff appropriately, so that you know, right down the line the correct advice is being administered. “With a naturopath operating within your pharmacy they would need 100% supervision – but this is not the case.” Mr Carr said the uptake of naturopaths in pharmacies has been increasing due to public interest and also the industry not being supervised.

Carr is such a strong advocate for evidence in medicine that his pharmacy not only has no naturopaths, but he’s taken steps to help consumers make more informed choices. Like the United States and Canada, the Australian medicines regulator has two standards for health products – one which requires evidence, and one for products that lack evidence of efficacy. For the latter products, in Carr’s pharmacy they are sold with this sticker: Stickers placed on products that haven’t been evaluated for efficacy by regulators.

It’s not just the traditional alternative medicine – even some more conventional but very old products sold in pharmacies lack good evidence of efficacy, and are probably of questionable efficacy. Used fairly and consistently, this type of labeling supports consumer self-selection, but also emphasizes which products are backed by good evidence of efficacy. It’s also an opportunity for consumers to initiate a dialogue with pharmacists about the evidence, hopefully supporting good discussions about treatment options. In the long run, it may help consumers make health care decisions that are more informed by the scientific evidence.

Conclusion: The personal must give way to the empirical

Our personal experiences and anecdotes may be meaningful to us, but when it comes to health and medicine, they are a poor way to determine therapies and treatments that work. Recognizing that I was fooling myself with glucosamine and chondroitin was hard to accept, but it was an important lesson that has stuck with me and (I hope) kept me humble about the relevance of my own experiences and observations as a health professional. It’s also made me more sensitive to the perspectives of others in my dialogue with patients about their own perceptions of health. We believe what we see. We want to believe what we are doing is helping. And when we’re desperate, we want to do something…anything…rather than facing facts. And today, as I’m carrying my dog up and down flights of stairs, and watching her struggle to stand up, I’m struggling with that very issue.

Bored people reach for the crisps

From Doughnuts to Oatmeal, You'll Never Taste the Beans in These Recipes

What To Do if You Suspect Gluten Problems